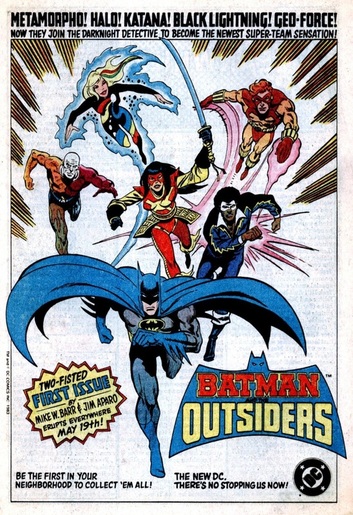 While the story in the final issue of The Brave And The Bold (#200, July 1983) is a sneak-peak of the series (and printed a month prior to the first issue of Batman & The Outsiders), the story actually takes place following the third issue of the series. 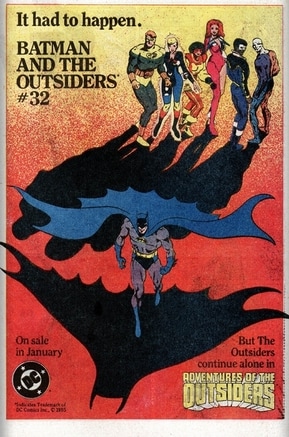 Issues #1-19 of this series are collected in:

Batman's former personal strike force departed the doom and gloom of Gotham for the sunny skies of California in the opening issue of this title; they based themselves at Station Markovia, an oil rig just off the coast of Santa Monica.

This series ran for 50 issues and was then relaunched as Batman And The Outsiders (Vol. 2), featuring a mix of current and new members.

This series has been collected (except for #26-27) in the following trade paperbacks:

-> Outsiders: Five Of A Kind is a mini-series (2007), composed of five one-shots; after the events in Outsiders (Vol. 3) #50, Batman is looking to put together his own team of Outsiders.

​In each issue, he auditions two heroes for his roster:


As a result of Batman R.I.P. and Final Crisis (where Batman apparently died), the series was renamed Outsiders (Vol. 4).

It has been collected in trade paperback (except for #38-40):