The first incarnation of the team (unofficially) debuted in The Brave And The Bold #54 (July 1964) as a "Junior Justice League", featuring Robin (Dick Grayson), Kid Flash (Wally West), and Aqualad (Garth), the sidekicks of Justice Leaguer members Batman, the Flash, and Aquaman, respectively. 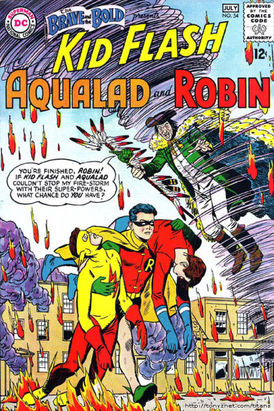 ​The group made its first appearance under the name "Teen Titans" in The Brave And The Bold #60 (July 1965), joined by Wonder Girl (Donna Troy), the younger sister of Wonder Woman. 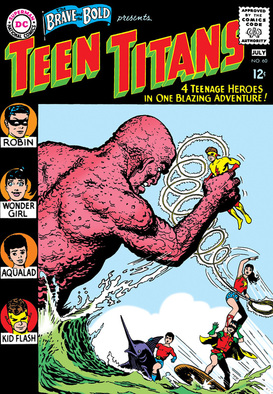 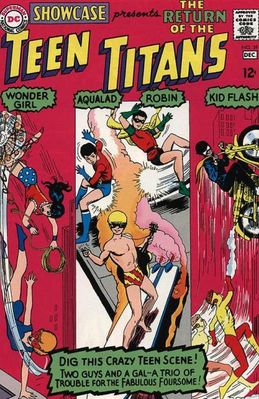 A Teen Titans annual was published in 1999, and although it may appear like a Silver Age annual, this one-shot was actually a ''replica edition'' of a book that was never actually published. "The Monster Machine" is the only original story in this issue. The story consists of cartoon cells from the old Filmation Adventures television show adapted to comic form, keeping the altered-for-TV uniforms and colors.

All other features are reprints:

​While only a modest success with its original incarnation, the series became a hit with its 1980 revival, under the stewardship of writer Marv Wolfman and artist George Pérez, who relaunched the team as The New Teen Titans, aging the characters to young adulthood.

The New Teen Titans series was re-titled Tales Of The Teen Titans with issue #41 (April 1984).

After several months (starting with Tales Of The Teen Titans #59, which reprints DC Comics Presents #26; the first appearance of The New Teen Titans), this series turned into a reprint comic, with #60-91 reprinting The New Teen Titans (Vol. 2) - a second series launched by DC to capitalize on the series' success - at a delay of about 15 months, from issue #1-32 (with new covers). 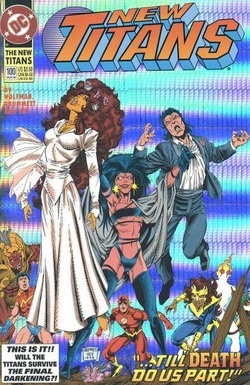 Read more about this in the Robin: History section (on Dick Grayson).

NOTE: Some volumes collecting The New Teen Titans (Vol. 1) also include issues from this run; they have been highlighted in yellow.

With the Teen Titans properties rivaling Marvel's X-Men for popularity at the time, another new title was launched in August 1986, this time to focus less on the team itself than on individual Titans, hence "Spotlight".

​Team Titans spun out of the New Titans series and ran for 24 issues and two annuals, from September 1992 to September 1994.

​The series was relaunched as Teen Titans (Vol. 2) in October 1996, with a roster of all-new members under the mentor-ship of the Atom (Ray Palmer), who had been de-aged to his teenage years (following the events of Zero Hour).

A contest was held in the letters pages to determine who would join the team. Robin (Tim Drake), won the vote, but editors on the Batman titles banned his appearance, forcing the writer to use Captain Marvel Jr. instead. His inclusion failed to boost sales and the series was then canceled in September 1998 after 24 issues (and one annual).
Between Teen Titans (Vol. 2) and The Titans, a new generation of young heroes formed a team in Young Justice, consisting of Superboy, Robin, Impulse, Wonder Girl, Secret and Arrowette.

​The 3-issue limited series JLA/Titans: The Technis Imperative (December 1998 - February 1999) (covers, trade paperback - includes Titans: Secret Files 1999 #1) led to the March 1999 debut of The Titans, a series featuring select Titans from all of the group's incarnations that ran for 50 issues until April 2003.
The 3-issue limited series Titans/Young Justice: Graduation Day concluded both The Titans and Young Justice and led to two new series: Teen Titans (Vol. 3) and Outsiders (Vol. 3).
Titans/Young Justice: Graduation Day has been collected in Teen Titans/Outsiders: The Death & Return Of Donna Troy (cover) (along with the 4-issue mini-series DC Special: The Return Of Donna Troy).

Download File
This series has been collected (almost completely). 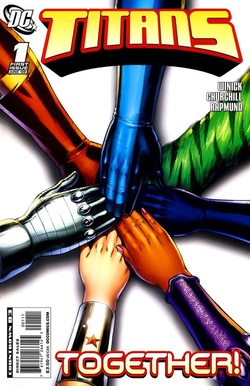 By 2006 the team consisted of only the younger members and some new additions; a concurrent series titled Titans debuted in April 2008 featuring some of the "classic" Titans from the original and 1980s rosters, with Dick Grayson, Donna Troy, Wally West, Garth, and Roy Harper using their "adult" codenames Nightwing, Troia, Flash, Tempest, and Arsenal, respectively. 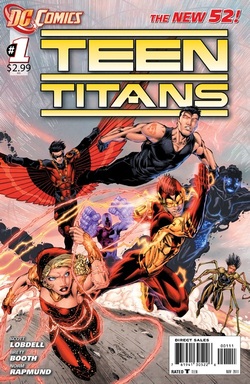 In November 2011, Teen Titans was relaunched as part of DC's The New 52 reboot, with an overhaul of the team, now containing Red Robin, Wonder Girl, Kid Flash, Bunker, Skitter and Solstice. 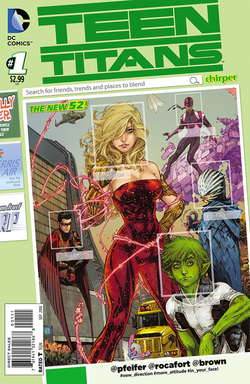 In July 2014, Teen Titans relaunched with a new #1. This incarnation of the team includes Red Robin, Wonder Girl, Raven, Bunker and Beast Boy.

DC: Rebirth is a 2016 relaunch by DC Comics of its entire line of ongoing monthly superhero comic books. Using the end of The New 52 initiative in May 2016 as its launching point, DC: Rebirth restored the DC Universe to a form much like that prior to the "Flashpoint" story-line while still incorporating numerous elements of The New 52, including its continuity.