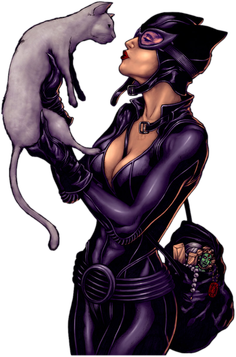 There have been many versions of Catwoman's origins and back story seen in the comic books over the decades.

Catwoman (then called "The Cat") first appeared in Batman #1 as a mysterious burglar and jewel thief, revealed at the end of the story to be a young, attractive woman (unnamed in the first story), having disguised herself as an old woman during the story and been hired to commit a robbery. Although the story does not have her wearing her iconic cat-suit, it establishes her core personality as a femme fatale who both antagonizes and attracts Batman. It is implied Batman may have deliberately let her get away, by blocking Robin as he tried to leap after her. She next appears in Batman #2 in a story also involving the Joker, but escapes Batman in the end. In Batman #3 she wears a fur mask and again succeeds in escaping Batman.

Batman #62 revealed that Catwoman (after a blow to the head jogged her memory) is an amnesiac flight attendant who had turned to crime after suffering a prior blow to the head during a plane crash she survived. She reveals this after being hit on the head by a piece of rubble while saving Batman while he was chasing her (although in the final issue of The Brave And The Bold, she admits that she made up the amnesia story because she wanted a way out of the past life of crime). She winds up reforming and stays on the straight and narrow for several years, helping out Batman in Batman #65 (June 1951) and #69 (February 1952), until she decides to return to a life of crime in Detective Comics #203 (January 1954), after a newspaper decides to publish stories of Batman's past adventures, and some crooks mock her about it. However, in this story, when Batman prevents a robbery and is knocked out by sleeping gas, Catwoman prevents her thugs from murdering him, though quickly claims she wants him as a hostage. Catwoman appears again as a criminal in Batman #84 (June 1954) and Detective Comics #211 (September 1954) for her final appearance until 1966. This was mostly due to her possible violation of the developing Comics Code Authority's rules for portrayal of female characters that started in 1954.

In the 1970s comics, a series of stories taking place on Earth-Two (the parallel Earth that was retroactively declared as the home of DC's Golden Age characters) reveal that on that world, Selina reformed in the 1950s (after the events of Batman #69) and had married Bruce Wayne; soon afterward, she gave birth to the couple's only child, Helena Wayne (The Huntress).

In The Brave And The Bold #197, the Golden Age origin of Catwoman given in Batman #62 is elaborated on, after Selina revealed that she never actually had amnesia. It was revealed that Selina Kyle had been the wife of an abusive man, and eventually decided to leave her husband. However, her husband had kept her jewelry in his private vault, and she had to break into it to retrieve the jewelry. Selina enjoyed this experience so much she decided to become a professional costumed cat burglar, and thus began a career that would repeatedly lead to her encountering the Batman.

A revision in Catwoman's origin, and the introduction of the modern version of the character, came in 1986 when writer Frank Miller and artist David Mazzucchelli published Batman: Year One, a revision of Batman’s origin. In the course of the story, the origin of Catwoman was also re-envisioned.

Selina Kyle is reintroduced as a cat-loving prostitute/dominatrix who is inspired to become a costumed cat burglar when she sees Batman in action. In this story, Holly Robinson is introduced as Selina's roommate, a young runaway and prostitute Kyle has taken in.

The 1989 Catwoman limited series (four issues, collected in trade paperback form as Catwoman: Her Sister's Keeper) expanded on Miller's Year One origin. Her Sister's Keeper explores Selina's early life as a prostitute and the start of her career as Catwoman. This is a dark and tragic period which culminates with Selina's former pimp Stan abducting and violently abusing her sister Maggie. Selina kills Stan to save her sister, and is able to do so with impunity.

Batman: Dark Victory, the sequel to Batman: The Long Halloween, implies that Catwoman suspects she is the long-lost illegitimate daughter of Carmine Falcone, although she finds no definitive proof of this. Selina's connection to the Falcone family is further explored in the mini-series Catwoman: When In Rome. Though more circumstantial evidence is added to the theory of Selina's Falcone heritage, no definitive proof is provided.

Portions of Her Sister's Keeper and the Year One origin conceived by Frank Miller remain canonical to Catwoman’s origin, while other portions have been dropped over the years. It has been implied that Her Sister's Keeper was rendered non-canonical by the events of Zero Hour, and subsequent writers have rejected Miller's choice to make the post-Crisis Catwoman a prostitute. In an attempt to harmonize the various versions, some writers have posited that Catwoman, early in her career, pretended to be a prostitute in order to scam lonely men and rob them. However, characters associated with Catwoman's past as a prostitute have remained a part of her supporting cast. Holly, from Batman: Year One, and her sister Maggie (from Her Sister's Keeper) have appeared regularly in the Catwoman series. 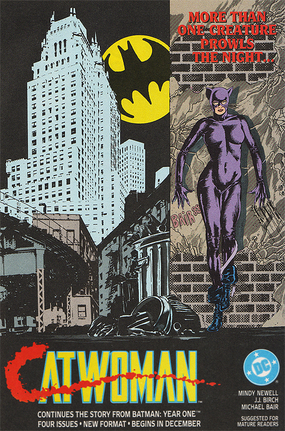 DC promo for the (then) upcoming Catwoman (Vol. 1) limited series 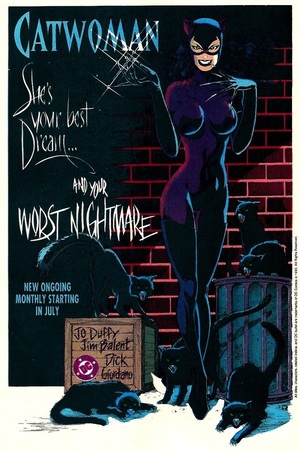 Announcement for the (then) upcoming Catwoman (Vol. 2) ongoing series

With only one (limited) series (Catwoman: Her Sister's Keeper) and a one-shot titled Catwoman: Defiant to her credit in her entire 50 year history, Selina Kyle finally stole the spotlight in her first ongoing series Catwoman (Vol. 2).

This series ran for 94 issues (from 1993 to 2001), before being relaunched into a third volume.
This run also includes:

Some issues of Catwoman (Vol. 2) have been collected in Batman trade paperbacks:

One of DC's longest running characters got a makeover (courtesy of writer Ed Brubaker and artist Darwyn Cooke) as Catwoman (Vol. 3) was launched. Catwoman had already gone through several changes since her very first appearance, but Brubaker's was one of the more dramatic.

Her first solo (ongoing) series had ended after 94 issues (in July 2001) with Catwoman's apparent death. Since then, Selina Kyle had been keeping a low profile, with many believing her to be dead. "The Trial Of The Catwoman" - a back up series in Detective Comics (Vol. 1) #759-762 - had private investigator Slam Bradley searching for proof that Catwoman was still alive. Kyle visited Bradley to explain her actions and urge him not to reveal the fact that she had faked her own death. The new series (Catwoman, Vol. 3) started a short time after and had Selina going through some major changes. She hadn't used her Catwoman costume for over 6 months and was seeing Leslie Thompkins, a therapist recommended by Batman, to talk through her problems. With her hair cut short, Selina ditched her old outfit for a slinky and (according to an approving Batman) more sensible black leather one. The opening story arc dealt with Catwoman's return to her old neighborhood of Gotham's East End and her worries that she might revert to her old ways.

​With Brubaker's tight, noir-like scripting and Darwyn Cooke's stylish artwork, Catwoman's new direction made the character more popular than ever.

Catwoman returned in her own series as part of DC's The New 52.