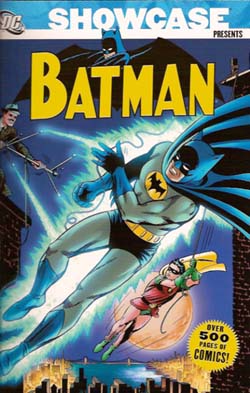 Showcase Presents: Batman (Vol. 1, 2006)
Showcase Presents is a line of black-and-white paperback books published by DC Comics at an average rate of two per month. Much like Marvel Comics' Essential Marvel volumes, each book usually includes over 500 pages of reprints, primarily from the Silver Age.

Six months prior to the debut of the Showcase volumes, DC began to reprint Golden Age stories (initially only for Batman and Superman) previously presented in Archive format in more affordable color paperbacks, such as The Batman Chronicles and The Superman Chronicles titles.

The Archives tend to focus on specific comics titles (e.g., largely separate volumes for stories presented in the pages of Batman and Detective Comics), while the Chronicles and Showcase volumes take a more chronological approach, mingling the titles to present the stories in (roughly) the order they were initially printed.