Listed in this section is a selection of comic book titles that are NOT part of the main DC continuity and therefore do NOT appear on the Batman timeline.

Not all titles listed here have the Elseworlds imprint; Elseworlds was a publication imprint for a group of comic books published by DC Comics that take place outside the company's canon. The Elseworlds imprint presents narratives in which existing characters or storylines are introduced to an entirely new idea or concept.

The Untold Legend Of The Batman
​1980

The Untold Legend Of The Batman is a 3-issue mini-series, telling the origin stories of Batman and most of his supporting cast. This mini-series was a great jumping-on point for readers who had heard of Batman and his friends but wanted to know more about their backstory.

The story was an attempt to synthesize all of the various tweaks and retcons that had been made to the Batman franchise over the years. Many of the details in this series were wiped away after Crisis On Infinite Earths and Batman: Year One, which came shortly thereafter.

This series is a fascinating look at how Batman has been developed since his debut in 1939 and how he and his compatriots have been written during the course of their first 41 years.

Batman: The Dark Knight Returns (4-issue mini-series) tells the story of Bruce Wayne, who, at 55 years old, returns from retirement to fight crime and faces opposition from the Gotham City police force and the United States government.

​This classic has been reprinted several times.
​

All-Star Batman & Robin The Boy Wonder is set in the early stages Batman's career, beginning with his recruitment of Dick Grayson as his sidekick Robin.

Frank Miller has stated that All-Star Batman & Robin The Boy Wonder exists in the same continuity as the other storylines in his "Dark Knight Universe":


However, this has been proven difficult as Batman: The Dark Knight Returns is set during the Cold War with an older Batman, while All-Star Batman & Robin features a younger Batman in a more modern setting.

Of all titles listed above, only Batman: Year One is considered canonical to the mainstream DC Universe, so it is the only title to appear on the Batman timeline.

In the original graphic novel (OGN) Batman: Arkham Asylum: A Serious House On Serious Earth, the inmates of Arkham Asylum have taken over the detention center for the criminally insane. Commissioner Gordon informs Batman that the inmates are threatening to murder the staff unless Batman agrees to meet with them.
​
The subtitle ''A Serious House On Serious Earth'' is taken the Philip Larkin poem "Church Going."

It's 1961 in Gotham, and a feeling of change is in the air. This is exemplified by the city’s newest protectors – Batgirl and Robin. They’re young, reckless, in love, and out to clean up the town come hell or high water.

This inevitably brings the two into conflict with Bruce Wayne, a hard-boiled detective in the GCPD. He sympathizes with them, but he’s got to do his duty nonetheless, and that includes arresting vigilantes. This may change, however, when both he and the dynamic duo run afoul of the city’s newest crimelord – a sadistic, pasty-skinned woman by the name of Bianca Steeplechase, known to some as a bit of a joker…
​
Followed by Thrillkiller '62.

Batman: Gotham By Gaslight features Batman fighting Jack The Ripper, when the serial killer comes to Gotham City (in 1889).

Followed by Batman: Master Of The Future, set in 1892. 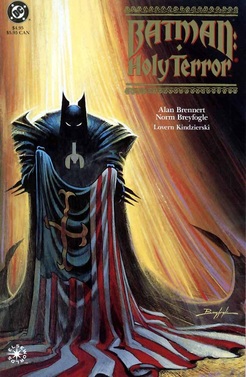 On an alternate Earth where America is a strict theocracy, a man of the cloth becomes a caped crusader when he learns that the government is corrupt.
​The first book to feature the Elseworlds logo: 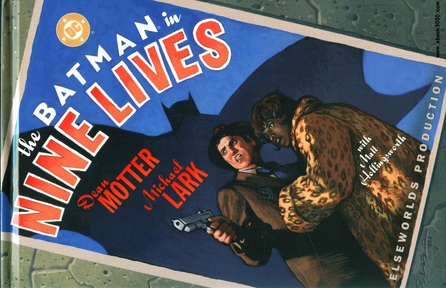 Set in the 1940s, at a time when Gotham City is rife with organized crime.

Rather than being a superhero story, this original graphic novel (OGN) more closely resembles a detective comic book from the same era, before the idea of superheroes had been introduced.

Though Batman still exists, members of his rogues gallery appear as normal criminals rather than mutated, disfigured or technologically enhanced characters.

The story is told in a sideways "landscape" format to better showcase the graphic, cinematic style of the art.

This 4-issue Elseworlds mini-series is set in a future that deals with a growing conflict between "traditional" superheroes, such as Superman, Wonder Woman, the Justice League, and a growing population of largely amoral and dangerously irresponsible new vigilantes - in many cases the offspring of the traditional heroes.

​Between these two groups is Batman and his assembled team, who attempt to contain the escalating disaster, foil the machinations of Lex Luthor, and prevent a world-ending superhuman war.

This 3-issue Elseworlds mini-series places Batman as a pulp hero adventurer in the 1920s where he battles against H.P. Lovecraft-inspired monsters.

Presented in stark black-and-white tones, Batman: Black & White is a series of Batman stories by a stellar line-up of comic industry creators, first published as an orignal 4-issue mini-series, and later as a backup feature in Batman: Gotham Knights.

The initial series contained five stories per issue, while Batman: Gotham Knights contained one story at the end of every comic.

Investigating a series of murders of Gotham's homeless, Batman discovers that the murders are being committed by a family of vampires led by Dracula himself, still "alive" and well.

A fantasy tale of the wizard known as Dark Joker, and his battles against the avenging Dark Knight. 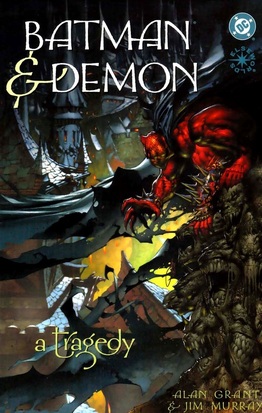 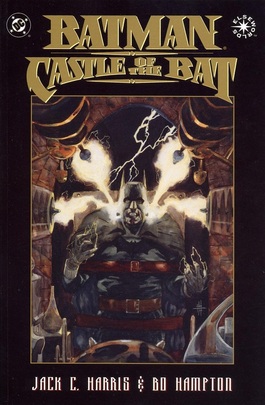 Based on the Frankenstein legend. Young Dr. Bruce Wayne attempts to resurrect his father into an avenging Bat-Man to discover who killed his parents.

Batman teams up with then-newspaper reporter Edgar Allan Poe to solve a series of raven-themed murders. 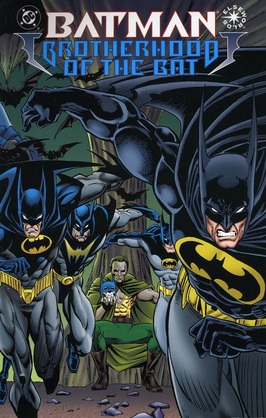 50 years into the future, Batman is dead, and the planet is within the grip of a plague set off by Ra's Al Ghul. He uses Bruce Wayne's rejected costume designs to create a league of costumed assassins, who are eventually confronted by Tallant, the son of Batman and Talia al Ghul.

In the year 2039, Gotham City is very nearly a police state, its citizens subject to unwarranted search and seizure. The Gotham Police clash almost daily with Federal agents, who are pursuing the legendary "Batman." Captain Gordon, the grandson of the original Commissioner Gordon, is also trying to find Batman, and find out what he knows about the murder of a Federal agent.

No other story has completely stripped Bruce Wayne down to his most basic psychological essence as Batman: Ego. After a wounded Batman sees a small-time crook kill himself rather than deal with the Joker or the police, he returns to the Batcave a shaken man. Losing pints of blood and dealing with a severely separated shoulder, Bruce Wayne is suddenly confronted by…Batman? 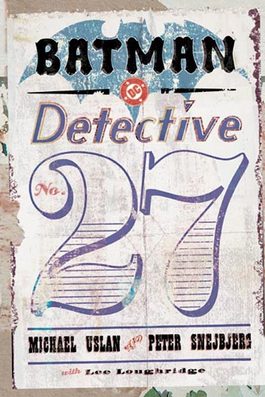 Bruce Wayne never becomes the caped crusader, but instead joins a conspiracy known as the Secret Society of Detectives, formed by Allan Pinkerton to fight the Knights of the Golden Circle shortly after the Civil War. The society consists entirely of top operatives worldwide, each receiving the designation Detective and a number in chronological order, with Wayne being #27. The story is told through Wayne's adventures starting in the year 1939 and flashbacks to the society's inception and earliest adventures. 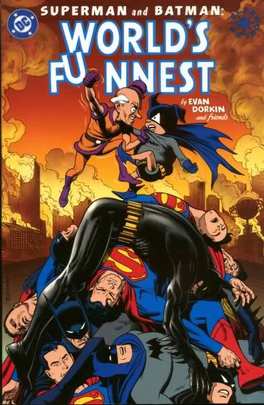 A retelling of the Superman & Batman mythos, with the heroes and characters in the aging in "real-time" from a first meeting in 1929 stretching onwards.

Features Golden Age superheroes of the DC Universe having to deal with the struggles of the 1950's, such as McCarthyism.

Justice League Of America: The Nail
​1998

The world is without Superman after a punctured tire prevents the discovery of baby Kal-El by the Kents. The Justice League is a group of heroes whom the media deem as dangerous aliens as a lethal conspiracy seeks to undermine all they stand for. 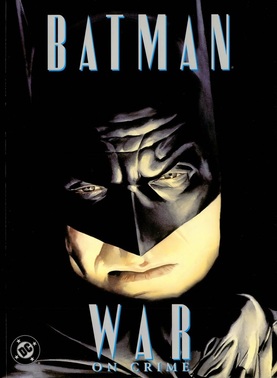 The second of the Alex Ross/Paul Dini series of six original, oversized graphic novels:
​
All stories have been collected in The World's Greatest Super-Heroes.

Bruce Wayne is the eight-year-old son of Dr. Thomas Wayne, a mayoral candidate for Gotham City, and Martha Wayne (née Arkham). After receiving death threats, Thomas contacts his friend Alfred Pennyworth to become the head of security at Wayne Manor. During an outing with his parents, Bruce is taken hostage by a mugger. He demands that the Waynes pay a ransom for the return of their son. When he attempts to remove Martha's pearl necklace, Thomas tries to intervene and the criminal shoots them both in front of Bruce. Following Bruce's return to Wayne Manor, Alfred learns that he has been named as Bruce's legal guardian by the Wayne parents in the event of their absence. Alfred agrees and presents himself to Bruce as his butler.

Kal-EL's rocket crash-lands in Ukraine, and the Man of Steel becomes the USSR's main hero.

Lex Luthor: Man of Steel (later collected as simply Luthor) features Superman's nemesis Lex Luthor as the main protagonist and explores Luthor's motivations behind being a constant foe to the Man of Steel inside a city that has largely embraced him. Luthor views Superman as a demigod who looks down on humanity and believes that in order to "save" the human race from extraterrestrial threats, Superman must be stopped. 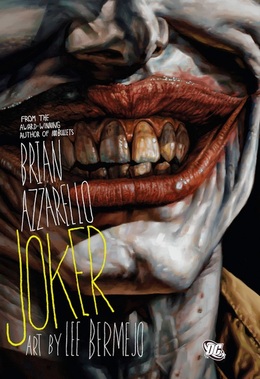 Joker is a unique take on the Batman mythos, set in an alternate reality with a noir atmosphere and narrated by one of the Joker's henchmen.
.Joker and Luthor have been collected in an Absolute edition: 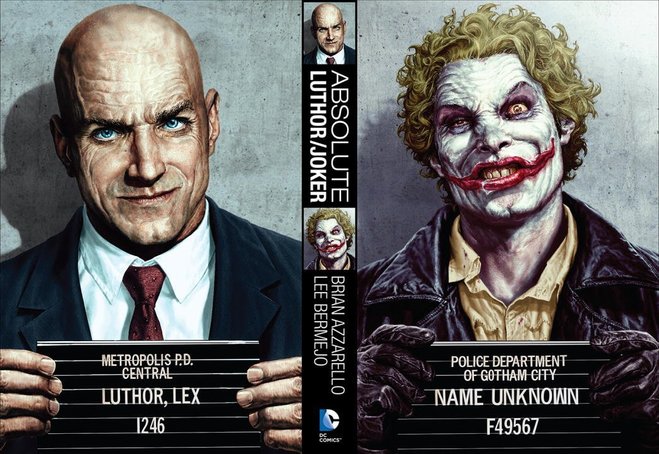 World War II is over and the Cold War has begun. ''The Age Of The Superhero'' is in decline. Superman, Wonder Woman and Batman, who survived the anti-hero sentiment of the Cold War, as well as eager newcomers like test pilot Hal Jordan and scientists Barry Allen and Ray Palmer, team up to defeat a threatening alien presence on Earth.