Having successfully reintroduced a number of DC Comics' (then known as National Periodical Publications) Golden Age superhero characters such as The Flash and Green Lantern during the late 1950's, editor Julius Schwartz asked writer Gardner Fox to reintroduce the Justice Society of America. Schwartz, influenced by the popularity of Major League Baseball's National League and American League, decided to change the name of the team from Justice Society to Justice League.

The Justice League of America debuted in The Brave And The Bold #28 (February–March 1960) and after two further appearances in that title (in #29-30), they got their own series, which quickly became one of the company's best-selling titles. 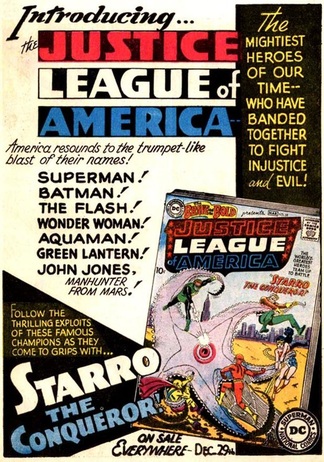 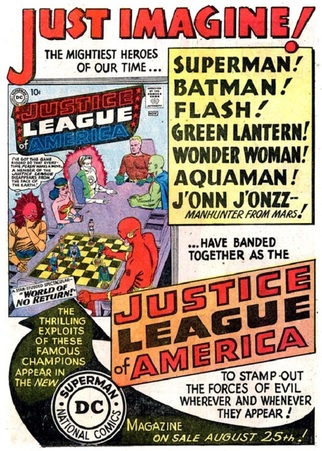 Ad for the Justice League ongoing series (from Batman #135, October 1960)
The original team consisted of:


As a reward for helping them solve their first case against Starro the Conqueror, Lucas "Snapper" Carr (noted for speaking in beatnik dialect and snapping his fingers) was made an honarary member of the team, and along with the other members had his own JLA signal device.

In their early adventures, it was editorial policy to use Superman and Batman sparingly in the JLA, as editor Julius Schwartz believed that the World's Finest duo got enough exposure elsewhere in the DC line.

Three of DC's other surviving or revived characters, Green Arrow, The Atom and Hawkman were added to the roster over the next four years. 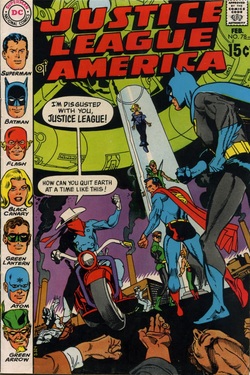 Seeking to capitalize on the popularity of other team books, which focused upon heroes in their late teens/early 20s, the Justice League series was revamped by writer Gerry Conway and artist Chuck Patton; after most of the original heroes fail to help fend off an invasion of Martians, Aquaman dissolves the League and rewrites its charter to allow only heroes who will devote their full time to the roster (#232 & Annual #2, 1984).

Longtime JLA fans were critical of the Detroit based team, and did not approve of what author Gerry Conway was trying to do. Many saw this as the beginning of the end of the title.

Clearly, DC themselves were not convinced, as issue #237 and then #240 had "untold" tales of the JLA and issue #250 announced "The return of the Justice League", featuring a more familiar line up. From that issue onward, Batman returned to the team.

Despite the Caped Crusaders presence, the book's demise continued, and following the deaths of Vibe, Gypsy and Steel in the company wide ''Legends'' story line, the book was cancelled with issue #261.

The Justice League was floundering. With most of its fan-favorite characters on extended sabbaticals, and little more than minor heroes making up its roster, it was clear that the team needed a major overhaul. But no-one quite expected how drastic the transformation would truly be in the hands of writers Keith Giffen and J.M. DeMatteis and artist Kevin Maguire.

Instead of embracing the grim and gritty tone set by Frank Miller's "Batman: The Dark Knight Returns" from the previous year and its countless imitators, Giffen and Dematteis decided to do a complete turnaround and crafted a super hero sit-com.

While their collaboration resulted in a sophisticated series of well thought out fiction, the emphasis was placed on humor over drama, and characterization over violence. Nonetheless, amid the absurd situation and over-the-top super villains, the pair's humanity shone through brilliantly. With just the right touch of action, the resulting Justice League title was a smash success of a comic, a page turner of a different ilk, and DC's original team franchise was restored to its rightful place as king of the mountain.

Spinning out of the events of "Legends" the Justice League reformed, dropping the "of America" part of its name at the insistence of manipulative new backer Maxwell Lord. Comprised of the Martian Manhunter, Black Canary, Captain Marvel, Batman, Green Lantern Guy Gardner, Dr. Fate, Mr. Miracle, Dr. Light, and Blue Beetle, and eventually media promoter Booster Gold, the Justice League battled the likes of the Royal Flush Gang, the Rocket Red Brigade, as well as each other, changing and shifting their roster, and later adding members Fire and Ice to their ranks. 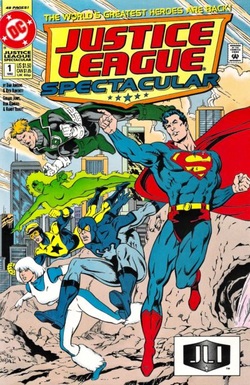 The Justice League titles expanded to a total of four by the early to mid-1990s:


Justice League: Europe was later retitled to become the second volume of Justice League: International.
However, with new writers and artists coming and going into the Justice League titles, there was very little consistency in continuity. The more powerful and recognizable characters such as Superman, Green Lantern (Hal Jordan), Aquaman and Batman came and went in the various titles, replaced by lesser known characters such as Bloodwynd, Maya, Maxima, Nuklon, Obsidian, Tasmanian Devil, and Triumph.

Longtime JLI-era characters such as Captain Atom, Martian Manhunter, and Power Girl were revised and revamped repeatedly, with mixed responses from fans.

By the mid to late 1990s, with the commercial success of the series fading, each of the titles was eventually cancelled.

The team was called to action by Hannibal Martin, a representative of the United Nations. He asked that Martian Manhunter select a "strike team" of fellow Justice League members and to "lead them on a very special mission".

In the later part of the title's run, J'onn watched over a team of younger, less experienced heroes, including Gypsy, The Ray, Triumph, and Mystek, as well as L-ron/Despero.

The team is led by Captain Atom and consists of Maxima, Blue Beetle (Ted Kord), Booster Gold, and Amazing-Man (Will Everett III). They were later joined by Firestorm (Ronald Raymond), Plastique, and the Wonder Twins (Zan and Jayna). Carol Ferris became the administrator of their Mount Thunder facility.

The characters never referred to the team as "Extreme Justice" in the series; however, they were called that in an issue of "Justice League America".
Although at one point there were 3 Justice League groups in action (Extreme Justice, Justice League: America and Justice League: Task Force), there was very little unity between the teams and a strong sense of rivalry among the respective leaders, Wonder Woman, Captain Atom, and the Martian Manhunter, regarding which team would succeed in the pursuit of justice.

In the summer of 1996, all three Justice League series were cancelled.

A Justice League of America formed in the September 1996 3-issue limited series Justice League: A Midsummer's Nightmare, which reunited the "Original Seven" of the League for the first time since Crisis On Infinite Earths.

A precursor to the following year's JLA ongoing series, A Midsummer's Nightmare not only saw the return of major characters to DC's premier team, but was also one of the first major DC titles to feature enhanced computer effects. 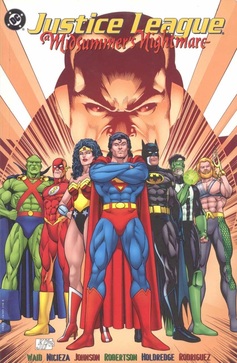 In 52 (week 24), Firestorm recruits a group to reform the Justice League. It consists of Firehawk, Super-Chief, Bulleteer, and Ambush Bug. They fight a deranged Skeets who takes Super-Chief's powers, killing him and numerous people who had received powers through Lex Luthor's Everyman Project. Afterward, Firestorm breaks up the team.

One year after the events of Infinite Crisis, Superman, Batman, and Wonder Woman reunite in the Batcave to re-form the League in Justice League of America #0, the kick-off for a new series: Justice League Of America (Vol. 2). This series ran for 60 issues, from 2006 to 2011. 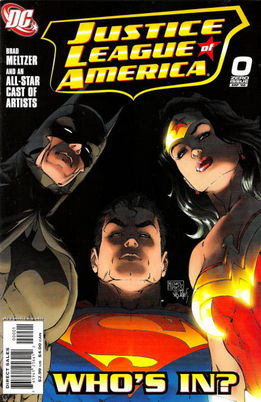 In September 2011, following the conclusion of the Flashpoint mini-series, all DC titles were canceled and relaunched, starting as issue #1, and DC's continuity was rebooted.

Justice League Of America (Vol. 2) was relaunched as Justice League, (that would make this series Vol. 2, since there was an earlier series with the same name, in 1987).

Justice League (Vol. 2) was the first of the new (New 52) titles released, coming out the same day as the final issue of Flashpoint. The first 6-issue storyline is set five years in the past and features a new origin for the team. The series then shifted to the present in issue #7. 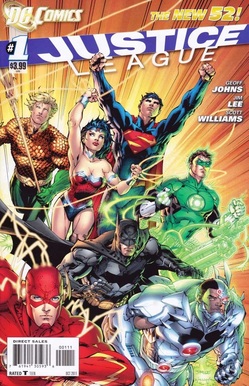 Justice League (Vol. 2) #1 (October 2011)
In addition to this series, two other Justice League-related titles were launched during the same month: 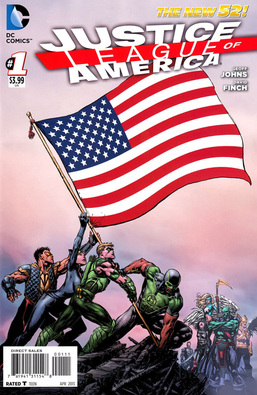 The Justice League, Justice League of America and Justice League Dark clash in the "Trinity War" storyline; Atom is later revealed to be from a parallel universe; she is in fact a mole on both teams, and a member of the evil Crime Syndicate of Earth-Three. The Syndicate roundly defeats the assembled Leagues, triggering the Forever Evil crossover event.
In August 2013, it was announced that Justice League of America would be retitled Justice League Canada following Forever Evil, with the team relocating to Canada. Adam Strange and a brand new character of Canadian origin will join the team.[77] In December 2013, Jeff Lemire, the writer of the new Justice League Canada series, announced that Animal Man would be a part of the team.[78] However, in January 2014, it was announced that the series would no longer be retitled, instead relaunching as Justice League United. The series, written by Lemire and drawn by Mike McKone, will feature a team consisting of Animal Man, Martian Manhunter, Green Arrow, Hawkman, Stargirl, Supergirl, Adam Strange, Alanna Strange and an all new, super-powered Cree teenager.[79]