The series started out as a superhero book, featuring the adventures of the Star-Spangled Kid and Stripesy. With issue #7 (1942), the title starred the Newsboy Legion.
A series of stories featuring Robin, The Boy Wonder began in issue #65 (1947).

The first solo Robin series began with what the cover promised would be 'a thrilling new series of smash adventures.' Readers seemed to agree, and Robin held this spot for five years until Star Spangled Comics published its last issue (#130). 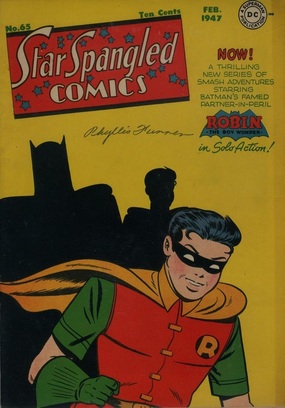 When Star-Spangled Comics ended in 1952, it was retitled Star Spangled War Stories and lasted another 204 issues (until 1977).

Initially, Star Spangled War Stories was a retitling of Star-Spangled Comics and continued the numbering of its predecessor with #131. That lasted until #133, when DC rebooted the numbering with issue #3 - even though there had already been three issues before that.