The original Suicide Squad appeared in six issues of The Brave And The Bold (Vol. 1); their very first appearance was in #125 (1959). The team later appeared in Action Comics (Vol. 1) #552 (1984). Though the earliest incarnation of the team did not have the espionage trappings of later Squads, it laid much of the groundwork for Squad field leader Rick Flag, Jr.'s personal history.
In the wake of DC's line-wide Crisis On Infinite Earths event, several new book launches were conceptualized, with writer John Ostrander assigned the task of resurrecting the Suicide Squad for an ongoing monthly series. While Ostrander initially found the concept absurd, he soon hit upon the government black ops hook. The team (and its administrator Amanda Waller) were introduced in the Legends mini-series (6 issues), with the original Silver Age Squad's back-story fleshed out further in Secret Origins (Vol. 2) #14 and modern Suicide Squad member Nightshade getting her own origin story (involving the Squad) in Secret Origins (Vol. 2) #28.

The first volume of Suicide Squad, written by modern Squad creator John Ostrander, launched in May 1987, shortly after the team was introduced in the Legends crossover event. It lasted for 66 monthly issues, along with one annual and one special (Doom Patrol & Suicide Squad Special #1), both published in 1988.

Though Ostrander's Suicide Squad (Vol. 1) series was canceled in 1992 with issue #66, the concept lived on in various DC story-lines throughout the years:

Keith Giffen's short-lived Suicide Squad run (which began in November 2001 and lasted 12 issues) follows a new version of the Squad, designated ''Task Force Omega'', and run by Sgt. Frank Rock. Together with his right-hand (and wheelchair-bound) man Bulldozer, Rock taps new characters Havana and Modem to round out the team's mobile HQ. President Lex Luthor and Secretary of Metahuman Affairs Amanda Waller are shown to be supplying the Squad's assignments.

Amanda Waller and the Suicide Squad were heavily involved in the events and fallout of 52.

During much of this time, Waller ran the Squad covertly, due to her station as the White Queen of Checkmate (DC's other government agency). This inter-faction tension is a recurring theme throughout many Squad stories of this era.

John Ostrander returned to the Suicide Squad for an eight-issue mini-series, starting in November 2007. The series takes place roughly between the Squad's appearance in Checkmate (Vol. 2) #6-7 and the events of Salvation Run (as Amanda Waller has already been ousted from her position at Checkmate, but Deadshot and Chemo are still with the Squad and not exiled). It is functionally a sequel to the Checkmate arc, detailing how Rick Flag, Jr. survived his apparent death before returning to Waller's Suicide Squad.

DC Comics' official solicitations consistently referred to the mini-series as Suicide Squad: Raise The Flag, though this nomenclature is never used within any individual issue or collected edition of the miniseries.

The Squad made prominent appearances in a four-issue Manhunter (Vol. 4) arc and during the Blackest Night crossover event. Suicide Squad (Vol. 1) #67 was released over a decade after the last issue - considered final at the time - as part of a Blackest Night tie-in series of resurrected titles. In his multiverse-spanning adventures, Booster Gold briefly cooperated with a version of the Silver Age Squad.

These issues mark the Squad's final appearances prior to DC Comics' New 52 continuity reboot in 2011. 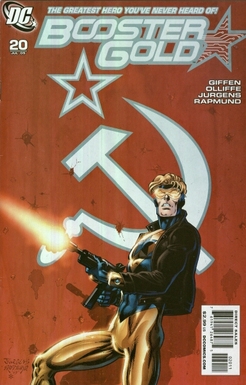 A new Suicide Squad title launched in September 2011 as part of The New 52 (a reboot of the DC Comics universe). Amanda Waller once again directs a crew of black ops agents on covert government missions, with Deadshot serving as the field team's leader.

This 2014 relaunch sees Deadshot and Harley Quinn teaming up with new Squad members Black Manta, Joker's Daughter and the Reverse Flash. Deathstroke was an initial member of the revamped roster in issue #1, but quickly turned on his "teammates" in the following issue. 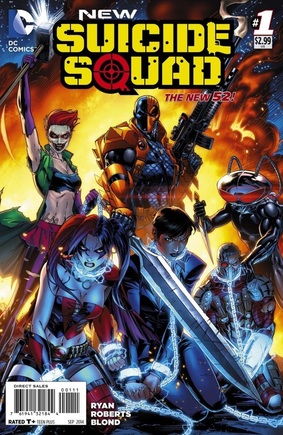