Batwoman and Bat-Girl were created to be romantic interests for Batman and Robin (as well as wannabe crime-fighting associates).

Betty Kane - the niece of Kathy Kane - visits her aunt in Gotham City, After discovering her aunt's dual identity, Betty convinces Batwoman to train her as her (Robin-like) sidekick. 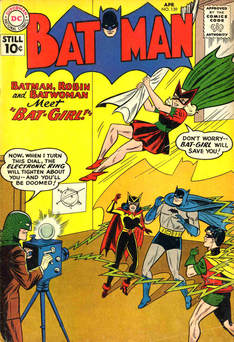 Batman (Vol. 1) #139 (April 1961) features the first appearance of Betty Kane/Bat-Girl)
Later, in the 1970s, Batwoman and Bat-Girl were revived and were regarded to have been inactive for several years. Bat-Girl became a member of the Teen Titans West in Teen Titans (Vol. 1) #50, but only appeared a few times in this era:
​
Also during this period, Betty met her successor Barbara Gordon in Batman Family #16 (March 1978) and was also present at the wedding of Wonder Girl and Terry Long (in Tales Of The Teen Titans #50, February 1985).

Although Bat-Girl was not directly involved in Crisis On Infinite Earths, she (like many of those who had interactions with the Earth-One (Silver Age) Batman were erased from existence when the multiverse was collapsed into a single universe.

After Crisis On Infinite Earths, Betty was re-imagined as Mary Elizabeth Kane (Bette), better known as Flamebird. Most of her early crime-fighting history as Bat-Girl was removed from continuity. It was mentioned that she had an "Aunt Kathy" (in Beast Boy #3, March 2000), but it was not specified whether this was the Kathy Kane who was believed to have been killed by the Bronze Tiger (in Suicide Squad, Vol. 1 #38, February 1990).

After Infinite Crisis (2006), it was established that Bette Kane's aunt was the original Batwoman (Kathy Webb Kane), and her cousin the new Batwoman (Kate Kane). 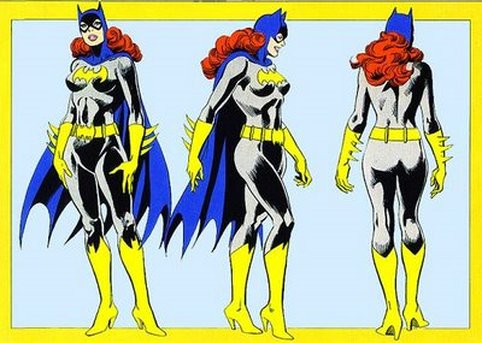 In 1967, Betty Kane was replaced by Barbara Gordon, who later came to be identified as the first Batgirl. Her creation came about as a joint project between DC Comics editor Julius Schwartz and the producers of the 1960s Batman television series. In order to boost ratings for the third season of Batman, the producers requested a new female character be introduced into publication that could be adapted into the television series.

While the introduction of Batgirl into the Batman television series failed to save it from cancellation, her comic book counterpart gained popularity and made regular appearances in Detective Comics, Batman Family and several other books produced by DC until 1988.

DC Showcase Presents: Batgirl is a collection of Batgirl (Barbara Gordon) stories in chronological order and in black-and- white. This collection reprints stories from January 1967 to September 1974 (see below). 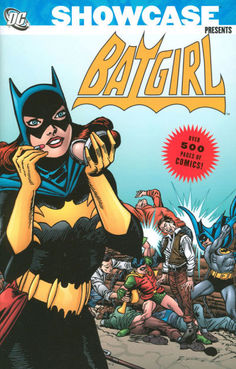 ​In March 1988, Batgirl (Barbara Gordon) appeared in Batgirl Special #1, in which she retires from crime-fighting. She subsequently appeared in Alan Moore's graphic novel Batman: The Killing Joke, where - in her civilian identity - she is shot through the spinal cord by the Joker and left paraplegic. She was recreated as the computer expert and information broker Oracle.

In the crossover Batman: No Man's Land (1999), the character Helena Bertinelli, known as Huntress, briefly assumes the role of Batgirl until she is stripped of the identity by Batman for violating his stringent codes.

​The same story-line introduces the character Cassandra Cain, who takes the mantle of Batgirl under the guidance of Batman and Oracle (Barbara Gordon).

Cassandra Cain became the first Batgirl to star in a regular series (Batgirl, Vol. 1) as well as one of the most prominent characters of Asian descent to appear in American comics after her successful appearances alongside Batman in Batman: No Man's Land (1999).

Batgirl (Vol. 1) follows Cassandra Cain's attempt to become a full fledged crime fighter as Batman and Oracle (Barbara Gordon, the original Batgirl) watch over her and provide help when needed.

This run also includes:
​
Batgirl (Vol. 1) was canceled in 2006. That same year, during the company-wide event One Year Later, Cassandra was established as a villain and head of the League Of Assassins. After receiving harsh feedback from readership, she was later restored to her original conception (see Batgirl, Vol. 2, below).

This series has been collected (partly) in the following trade paperbacks: 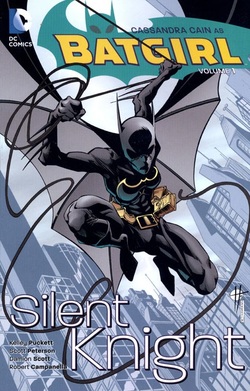 The first issue of Batgirl (Vol. 3) is set after Batman's apparent death during Final Crisis and shows a disillusioned Cassandra passing her Batgirl identity to her close friend, Stephanie Brown. She leaves Gotham, with her whereabouts unknown. After Batman (Bruce Wayne) returns, it is revealed that Cassandra's disillusionment was a ruse, and that she had willingy handed over her Batgirl mantle to Stephanie because she was acting under her mentor's order in the event of his death or disappearance.

Stephanie Brown begins using the costume that was left behind and soon Batman (now Dick Grayson) and Robin see that this Batgirl is not Cassandra Cain. Eventually Barbara Gordon figures out that Stephanie has taken up the mantle and urges her to stop, telling her she is going to get herself killed. Soon the two are forced to team up and Stephanie fights Scarecrow, earning Barbara's respect, and the blessing is given to Stephanie. The two begin working together and soon Dick Grayson confronts them about this, heatedly. Eventually he allows the two to operate out of the Batcave. Barbara also gives Steph a new Batgirl costume to replace the costume she was using, and had begun to rip and tear.

In September 2011, DC Comics' entire line of superhero books- including its Batman franchise - was canceled, and 52 new series relaunched with new #1 issues as part of The New 52.

One of the more controversial changes of the relaunch was Barbara Gordon's return to the role of Batgirl, involving her regaining mobility to her legs, after being paralyzed in Batman: The Killing Joke over 20 years ago.

​In March 2016, DC Comics announced it would be relaunching all of its monthly titles under the DC Rebirth event. The relaunch restores elements of the pre-Flashpoint DC continuity while maintaining elements of The New 52.

Among the new titles launched:
​ 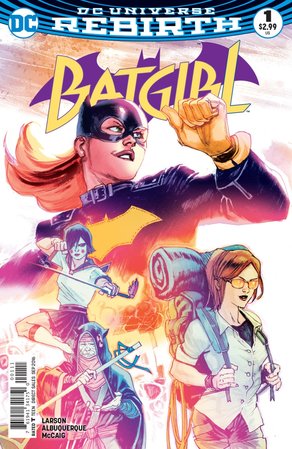 Batgirl & The Birds Of Prey